Let’s face it, there’s a lot of “climate science” out there that’s absolute rubbish.

Type “climate change” into Google. Within seconds you can find statements that the Earth is warming or that its temperatue is stable (or cooling since 1998!). You can find “proof” that the warming is caused by the sun, volcanoes, flaws in the temperature data, or fossil fuel burning. You can read that the Hockey Stick graph is broadly accurate, or that it was manipulated by the IPCC to agree with a predetermined conclusion.

Whatever you read about climate change, chances are that there’s another source saying the opposite thing. It’s not like we’re all climatologists who can see straight through misinformation. So how do you possibly sort out what to believe?

When people ask me this question, I invariably respond with, “Assess the credibility.”

The ”climate change analysis” you read could be from a national academy of science, or from a blogger. It could be from an atmospheric physicist or a economist. It could be from a scientific journal or a political think-tank. If we calculate credibility to be “expertise + objectivity”, it’s obvious that some sources merit more weight than others.

I’ve put together a climate change credibility spectrum, inspired by Greg Craven from the Manpollo Project. This is a basic way to assess credibility and assign weight to a source. Keep in mind that it is only used for scientific statements, like “Arctic summer sea ice will be gone by 2030″. Matters of policy, like “we should adopt a cap-and-trade system”, are on a much more equal playing field – because they’re opinions, not facts. 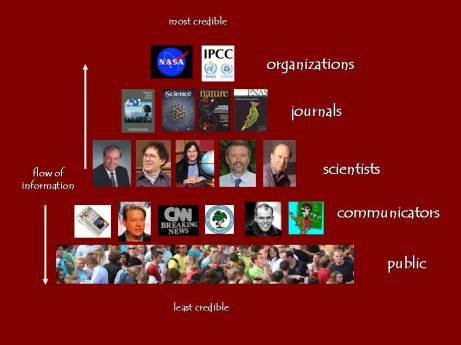 The scientific community starts with scientists, and I want to stress that this category only includes scientists with experience in the issue at hand. Just because someone has a PhD in one area of science doesn’t mean that they are an expert in all areas. For example, it’s very easy for a computer scientist to go through ten years of university without studying any biology at all.  Treating them as an expert in evolution, therefore, would be illogical.

These scientists write peer-reviewed papers, published in journals like Nature and Science, which are another step up the credibility spectrum. Instead of just having the name of an expert attached to them, their methods and conclusions have been evaluated for robustness and accuracy. This is the minimum level of credibility from which I recommend citing scientific claims.

However, as thousands of papers are published every month, and they’re generally studying the frontier of their field, it’s inevitable that some of them will be proven wrong later. As climatologists Gavin Schmidt and Michael Mann wisely said, peer review is a necessary but not sufficient condition.

That’s why there are scientific organizations and assessment reports, like NASA or the IPCC, which compile peer-reviewed knowledge which has stood the test of time into consensus statements. Even the top level of the credibility spectrum isn’t infallible, but it sure has a low error rate compared to other sources.

Everyone who isn’t a scientist, which is most of us, falls into the lower half of the credibility spectrum. The category I refer to as “communicators” includes the mainstream media, projects like Manpollo or 350.org, high school teachers, politicians…….They’re not part of the scientific community, so you should always check their citations, but they’re held more accountable for what they say than just any random person on the street. If they make glaring errors, people will be more upset than if the same errors were made by individuals – comments on YouTube, discussions with your neighbours – which make up the lowest rung of our credibility spectrum.

Something that I found really interesting  when I put this together was the general flow of information between different sources. In the scientific community, research starts with scientists, and the best research is published in journals, and the best journal articles are picked up by major organizations. As the scientific knowledge progresses through the different sources, the weaker assertions are weeded out along the way. The flow of information is going up the pyramid, towards the narrower part of the pyramid, so that only the best is retained.

However, in the non-scientific community, the flow of information goes the other way. Communicators present information to individuals, which is a much larger group. Information travelling down the pyramid, instead of up, allow rumours and misconceptions to flourish much more easily.

This isn’t to say that, when they come head-to-head, organizations are always right and individuals are always wrong. But given the history of such disagreements, and the levels of credibility involved, you’ll know where to place your bets.