A problem which has plagued oceanography since the very beginning is a lack of observations. We envy atmospheric scientists with their surface stations and satellite data that monitor virtually the entire atmosphere in real time. Until very recently, all that oceanographers had to work with were measurements taken by ships. This data was very sparse in space and time, and was biased towards certain ship tracks and seasons.

A lack of observations makes life difficult for ocean modellers, because there is very little to compare the simulations to. You can’t have confidence in a model if you have no way of knowing how well it’s performing, and you can’t make many improvements to a model without an understanding of its shortcomings.

Our knowledge of the ocean took a giant leap forward in 2000, when a program called Argo began. “Argo floats” are smallish instruments floating around in the ocean that control their own buoyancy, rising and sinking between the surface and about 2000 m depth. They use a CTD sensor to measure Conductivity (from which you can easily calculate salinity), Temperature, and Depth. Every 10 days they surface and send these measurements to a satellite. Argo floats are battery-powered and last for about 4 years before losing power. After this point they are sacrificed to the ocean, because collecting them would be too expensive.

This is what an Argo float looks like while it’s being deployed: 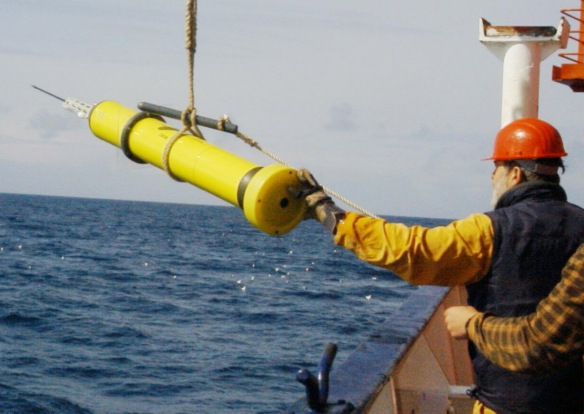 With at least 27 countries helping with deployment, the number of active Argo floats is steadily rising. At the time of this writing, there were 3748 in operation, with good coverage everywhere except in the polar oceans:

The result of this program is a massive amount of high-quality, high-resolution data for temperature and salinity in the surface and intermediate ocean. A resource like this is invaluable for oceanographers, analogous to the global network of weather stations used by atmospheric scientists. It allows us to better understand the current state of the ocean, to monitor trends in temperature and salinity as climate change continues, and to assess the skill of ocean models.

But it’s still not good enough. There are two major shortcomings to Argo floats. First, they can’t withstand the extreme pressure in the deep ocean, so they don’t sink below about 2000 m depth. Since the average depth of the world’s oceans is around 4000 m, the Argo program is only sampling the upper half. Fortunately, a new program called Deep Argo has developed floats which can withstand pressures down to 6000 m depth, covering all but the deepest ocean trenches. Last June, two prototypes were successfully deployed off the coast of New Zealand, and the data collected so far is looking good. If all future Argo floats were of the Deep Argo variety, in five or ten years we would know as much about the deep ocean’s temperature and salinity structure as we currently know about the surface. To oceanographers, particularly those studying bottom water formation and transport, there is almost nothing more exciting than this prospect.

The other major problem with Argo floats is that they can’t handle sea ice. Even if they manage to get underneath the ice by drifting in sideways, the next time they rise to the surface they will bash into the underside of the ice, get stuck, and stay there until their battery dies. This is a major problem for scientists like me who study the Southern Ocean (surrounding Antarctica), which is largely covered with sea ice for much of the year. This ocean will be incredibly important for sea level rise, because the easiest way to destabilise the Antarctic Ice Sheet is to warm up the ocean and melt the ice shelves (the edges of the ice sheet which extend over the ocean) from below. But we can’t monitor this process using Argo data, because there is a big gap in observations over the region. There’s always the manual option – sending in scientists to take measurements – but this is very expensive, and nobody wants to go there in the winter.

Instead, oceanographers have recently teamed up with biologists to try another method of data collection, which is just really excellent:

They are turning seals into Argo floats that can navigate sea ice.

Southern elephant seals swim incredible distances in the Southern Ocean, and often dive as far as 2000 m below the surface. Scientists are utilising the seals’ natural talents to fill in the gaps in the Argo network, so far with great success. Each seal is tranquilized while a miniature CTD is glued to the fur on its head, after which it is released back into the wild. As the seal swims around, the sensors take measurements and communicate with satellites just like regular Argo floats. The next time the seal sheds its coat (once per year), the CTD falls off and the seal gets on with its life, probably wondering what that whole thing was about.

This project is relatively new and it will be a few years before it’s possible to identify trends in the data. It’s also not clear whether or not the seals tend to swim right underneath the ice shelves, where observations would be most useful. But if this dataset gains popularity among oceanographers, and seals become officially integrated into the Argo network… …then we will be the coolest scientists of all.

3 thoughts on “With a Little Help from the Elephant Seals”