Last week I was lucky enough to attend the Second Workshop on Coupling Technologies for Earth System Models, held at the National Center for Atmospheric Research (NCAR) in Boulder, Colorado, USA. I was excited just to visit NCAR, which is one of the top climate research facilities in the world. Not only is it packed full of interesting scientists and great museum displays, but it’s nestled in the Rocky Mountains and so the view from the conference room looks like this:

The conference was focused on couplers – the part of a climate model that ties all the other components (atmosphere, ocean, land, etc.) together. However, the presentations covered (as Rob Jacob put it) “everything that physical scientists don’t care about unless it stops working”. Since I consider myself a physical scientist, this included a lot of concepts I hadn’t thought about before:

I was at the conference with Steve Easterbrook and his new M.Sc. student Daniel Levy, presenting our bubble diagrams of model architecture. (If you haven’t already, read my AGU poster schpiel first, or none of this will make sense!) As interesting and useful as these diagrams are, there were some flaws in our original analysis:

So far, we’ve repeated the analysis for the UK Met Office Model, version HadGEM2-ES. I created the dependency structure by going manually through every file and making good use of grep, which took hours and hours (although it was a nice, menial way to avoid studying for my courses!). Daniel is going to write a Fortran parser to make the job easier next time around. In the meantime, our HadGEM2-ES diagram is absolutely gorgeous and wonderfully accurate: 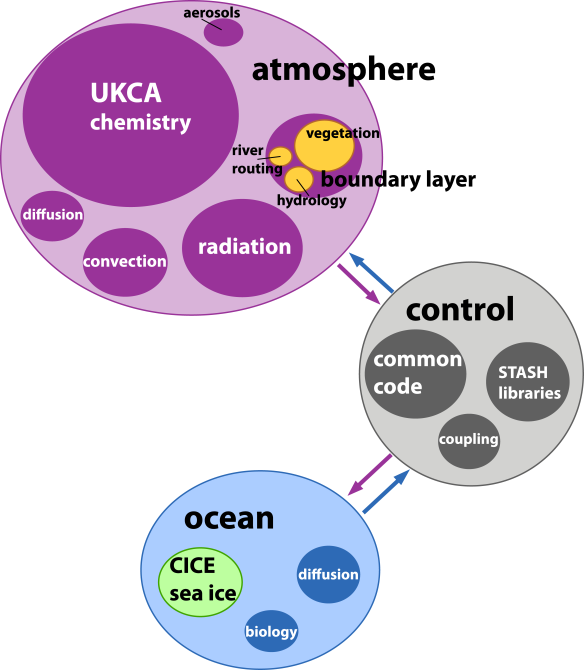 I will post future diagrams as they become available. We think the main use of these diagrams will be as communication tools between scientists, so they are free to use with attribution.

Just a few more weeks of classes, then I can enjoy some full-time research. Now that I’ve had a taste of being a proper scientist, it’s hard to go back!

Dr Kaitlin Naughten is an ocean modeller at the British Antarctic Survey in Cambridge, UK. She became interested in climate science as a teenager on the Canadian Prairies, and increasingly began to notice the discrepancies between scientific and public knowledge on climate change. She started writing this blog at age sixteen to help address this gap in public understanding, and it slowly evolved into a record of her research as a young climate scientist. Read more

Comments on any and all posts are more than welcome. However, please abide by a few rules:

Don't smear someone's reputation based on pure speculation. This includes, but is not limited to, climate scientists.

Please refrain from personal attacks on myself or other commenters. Mean comments about how much you hate this comment policy are also kind of pointless.