My summer job as a research student of Steve Easterbrook is nearing an end. All of a sudden, I only have a few days left, and the weather is (thankfully) cooling down as autumn approaches. It feels like just a few weeks ago that this summer was beginning!

Over the past three months, I examined seven different GCMs from Canada, the United States, and Europe. Based on the source code, documentation, and correspondence with scientists, I uncovered the underlying architecture of each model. This was represented in a set of diagrams. You can view full-sized versions here:

The component bubbles are to scale (based on the size of the code base) within each model, but not between models. The size and complexity of each GCM varies greatly, as can be seen below. UVic is by far the least complex model – it is arguably closer to an EMIC than a full GCM. 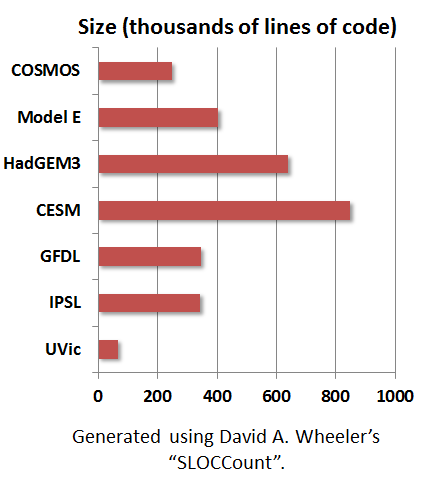 I came across many insights while comparing GCM architectures, regarding how modular components are, how extensively the coupler is used, and how complexity is distributed between components. I wrote some of these observations up into the poster I presented last week to the computer science department. My references can be seen here.

Although the summer is nearly over, our research certainly isn’t. I have started writing a more in-depth paper that Steve and I plan to develop during the year. We are also hoping to present our work at the upcoming AGU Fall Meeting, if our abstract gets accepted. Beyond this project, we are also looking at a potential experiment to run on CESM.

I guess I am sort of a scientist now. The line between “student” and “scientist” is blurry. I am taking classes, but also writing papers. Where does one end and the other begin? Regardless of where I am on the spectrum, I think I’m moving in the right direction. If this is what Doing Science means – investigating whatever little path interests me – I’m certainly enjoying it.

The shape of my summer research is slowly becoming clearer. Basically, I’ll be writing a document comparing the architecture of different climate models. This, of course, involves getting access to the source code. Building on Steve’s list, here are my experiences:

NCAR, Community Earth System Model (CESM): Password-protected, but you can get access within an hour. After a quick registration, you’ll receive an automated email with a username and password. This login information gives you access to their Subversion repository. Registration links and further information are available here, under “Acquiring the CESM1.0 Release Code”.

University of Victoria, Earth System Climate Model (ESCM): Links to the source code can be found on this page, but they’re password-protected. You can request an account by sending an email – follow the link for more information.

Geophysical Fluid Dynamics Laboratory (GFDL), CM 2.1: Slightly more complicated. Create an account for their Gforge repository, which is an automated process. Then, request access to the MOM4P1 project – apparently CM 2.1 is included within that. Apparently, the server grants you request to a project, so it sounds automatic – but the only emails I’ve received from the server regard some kind of GFDL mailing list, and don’t mention the project request. I will wait and see.
Update (July 20): It looks like I got access to the project right after I requested it – I just never received an email!

Max Planck Institute (MPI), COSMOS: Code access involves signing a licence agreement, faxing it to Germany, and waiting for it to be approved and signed by MPI. The agreement is not very restrictive, though – it deals mainly with version control, documenting changes to the code, etc.

UK Met Office, Hadley Centre Coupled Model version 3 (HadCM3): Our lab already has a copy of the code for HadCM3, so I’m not really sure what the process is to get access, but apparently it involved a lot of government paperwork.

Institut Pierre Simon Laplace (IPSL), CM5: This one tripped me up for a while, largely because the user guide is difficult to find, and written in French. Google Translate helped me out there, but it also attempted to “translate” their command line samples! Make sure that you have ksh installed, too – it’s quick to fix, but I didn’t realize it right away. Some of the components for IPSLCM5 are open access, but others are password-protected. Follow the user guide’s instructions for who to email to request access.

Model E: This was the easiest of all. From the GISS website, you can access all the source code without any registration. They offer a frozen AR4 version, as well as nightly snapshots of the work-in-process for AR5 (frozen AR5 version soon to come). There is also a wealth of documentation on this site, such as an installation guide and a description of the model.

I’ve taken a look at the structural code for Model E, which is mostly contained in the file MODELE.f. The code is very clear and well commented, and the online documentation helped me out too. After drawing a lot of complicated diagrams with arrows and lists, I feel that I have a decent understanding of the Model E architecture.

Reading code can become monotonous, though, and every now and then I feel like a little computer trouble to keep things interesting. For that reason, I’m continuing to chip away at building and running two models, Model E and CESM. See my previous post for how this process started.

I was still having trouble viewing the Model E output (only one file worked on Panoply, the rest created an empty map) so I emailed some of the lab’s contacts at NASA. They suggested I install CDAT, a process which nearly broke Ubuntu (haven’t we all been there?) Basically, because it’s an older program, it thought the newest version of Python was 2.5 – which it subsequently installed and set as the default in /usr/bin. Since I had Python 2.6 installed, and the versions are apparently very not-backwards-compatible, every program that depended on Python (i.e. almost everything on Ubuntu) stopped working. Our IT contact managed to set 2.6 back as the default, but I’m not about to try my hand at CDAT again…

I have moved forward very slightly on CESM. I’ve managed to build the model, but upon calling test.<machine name>.run, I get rather an odd error:

Now, I’m pretty new at shell scripting, but I can’t see the syntax error there – and wouldn’t syntax errors appear at compile-time, rather than run-time?

A post by Michael Tobis, who had a similar error, suggested that the issue had to do with qsub. Unfortunately, that meant I had to actually use qsub – I had previously given up trying to configure Torque to run on a single machine rather than many. I gave the installation another go, and now I can get scripts into the queue, but they never start running – their status stays as “Q” even if I leave the computer alone for an hour. Since the machine has a dual-core processor, I can’t see why it couldn’t run both a server and a node at once, but it doesn’t seem to be working for me.

Before I started this job, climate models seemed analogous to Antarctica – a distant, mysterious, complex system that I wanted to visit, but didn’t know how to get to. In fact, they’re far more accessible than Antarctica. More on the scale of a complicated bus trip across town, perhaps?

They are not perfect pieces of software, and they’re not very user friendly. However, all the struggles of installation pay off when you finally get some output, and open it up, and see realistic data representing the very same planet you’re sitting on! Even just reading the code for different models shows you many different ways to look at the same system – for example, is sea ice a realm of its own, or is it a subset of the ocean? In the real world the lines are blurry, but computation requires us to make clear divisions.

The code can be unintelligible (lndmaxjovrdmdni) or familiar (“The Stefan-Boltzmann constant! Finally I recognize something!”) or even entertaining (a seemingly random identification string, dozens of characters long, followed by the comment if you edit this you will get what you deserve). When you get tied up in the code, though, it’s easy to miss the bigger picture: the incredible fact that we can use the sterile, binary practice of computation to represent a system as messy and mysterious as the whole planet. Isn’t that something worth sitting and marveling over?

Dr Kaitlin Naughten is an ocean modeller at the British Antarctic Survey in Cambridge, UK. She became interested in climate science as a teenager on the Canadian Prairies, and increasingly began to notice the discrepancies between scientific and public knowledge on climate change. She started writing this blog at age sixteen to help address this gap in public understanding, and it slowly evolved into a record of her research as a young climate scientist. Read more

Comments on any and all posts are more than welcome. However, please abide by a few rules:

Don't smear someone's reputation based on pure speculation. This includes, but is not limited to, climate scientists.

Please refrain from personal attacks on myself or other commenters. Mean comments about how much you hate this comment policy are also kind of pointless.